this has been my main oc universe since i was a teeny tiny child who desperately wanted magic powers. it was primarily a method of escapism. it is an ever-changing and massively elaborate universe. getting it all out of my head and onto any tangible medium would be impossible. but let me get the basics on here.

on a small island on the coast of florida, the law has become eradicated. the town is now run by several high powered criminals. thats unrelated. this story is about the hip people living in this town, as well as the two sister cities on the islands surrounding it, the mysterious and somewhat ominous, Bridgeport, and the haven for the yuppie heirs to the world, West Port. this story starts when the local pretentious goth begins to develop telekinesis. 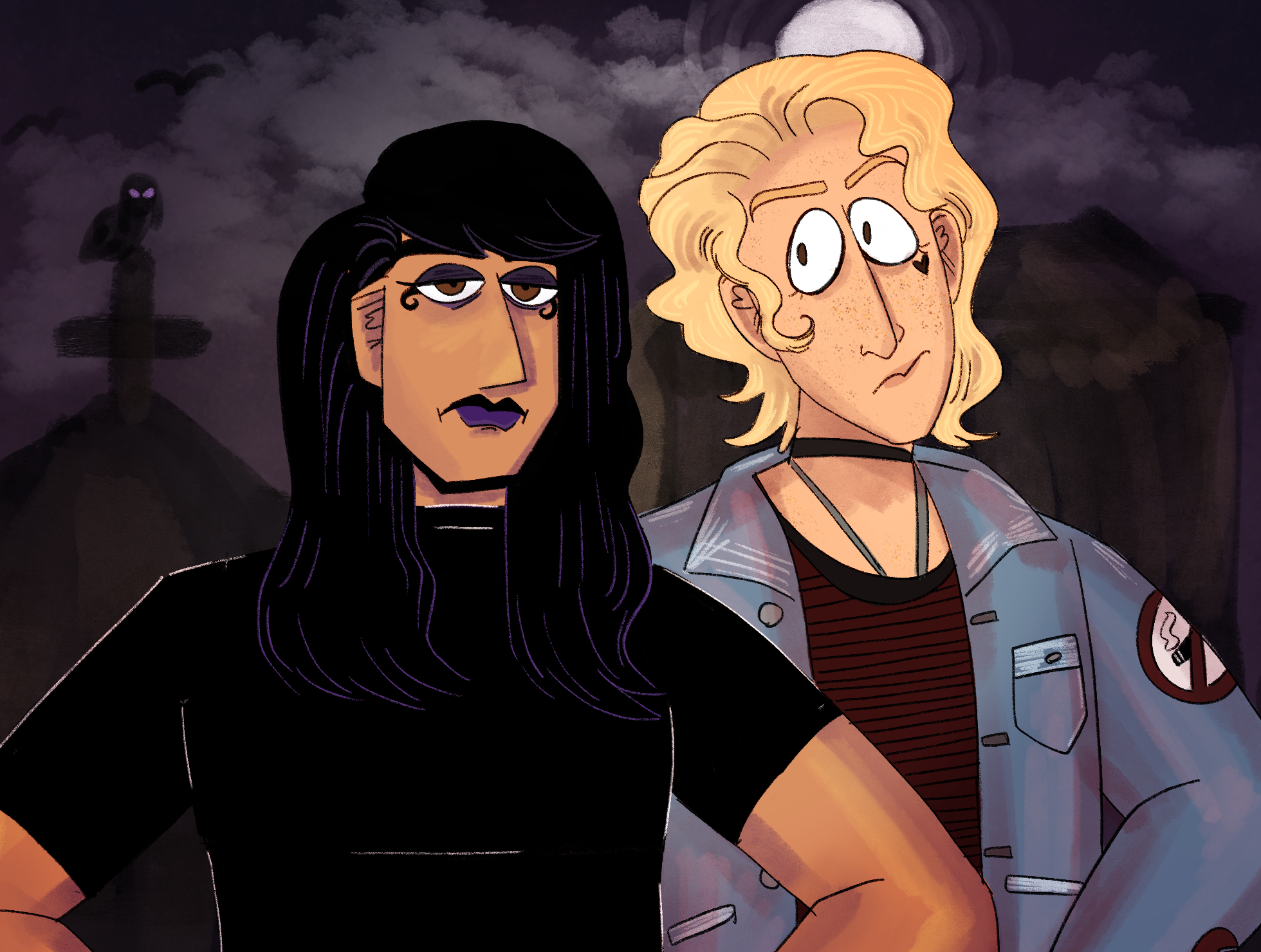 he think he's above it all. he was fired from claires for warning moms to take their children to real piercers. he develped telekinesis, and hes starting to have some weird issues with his reflection in the mirror, who seems to have developed a personality of his own. well that's hinky! him and his best friend, connie, like to sit around bitching and moaning about everything. him and connie are not in a social group in town because they are both bad at making other friends.

a punk musician whos issues with authority also got her fired from claires. she is a trans girl, but doesnt realize this until later on in the story. she has a crush on the mysterious fella who works at the local antique store/fence, Jack. she has two older brothers, Theo and Quentin, a sister (whos away at art school) named Adalia, and two lovely parents, Fran, a hairdresser who carries a brick in her purse (just in case!), and Terry, her quiet and mild mannered homemaker husband.

the younger cousin of a major criminal player in town, Nicoletta Gallancy. nobody wants to be her friend because being closely associated with these families is considered taboo among the average citizen. shes very girly but struggles with her gender. she doesn't realize she's a lesbian and think she has a crush on jack. she's at the point in her life where she has to decide whether she wants to be a normal citizen, or whether she wants to follow up in her family's footsteps. 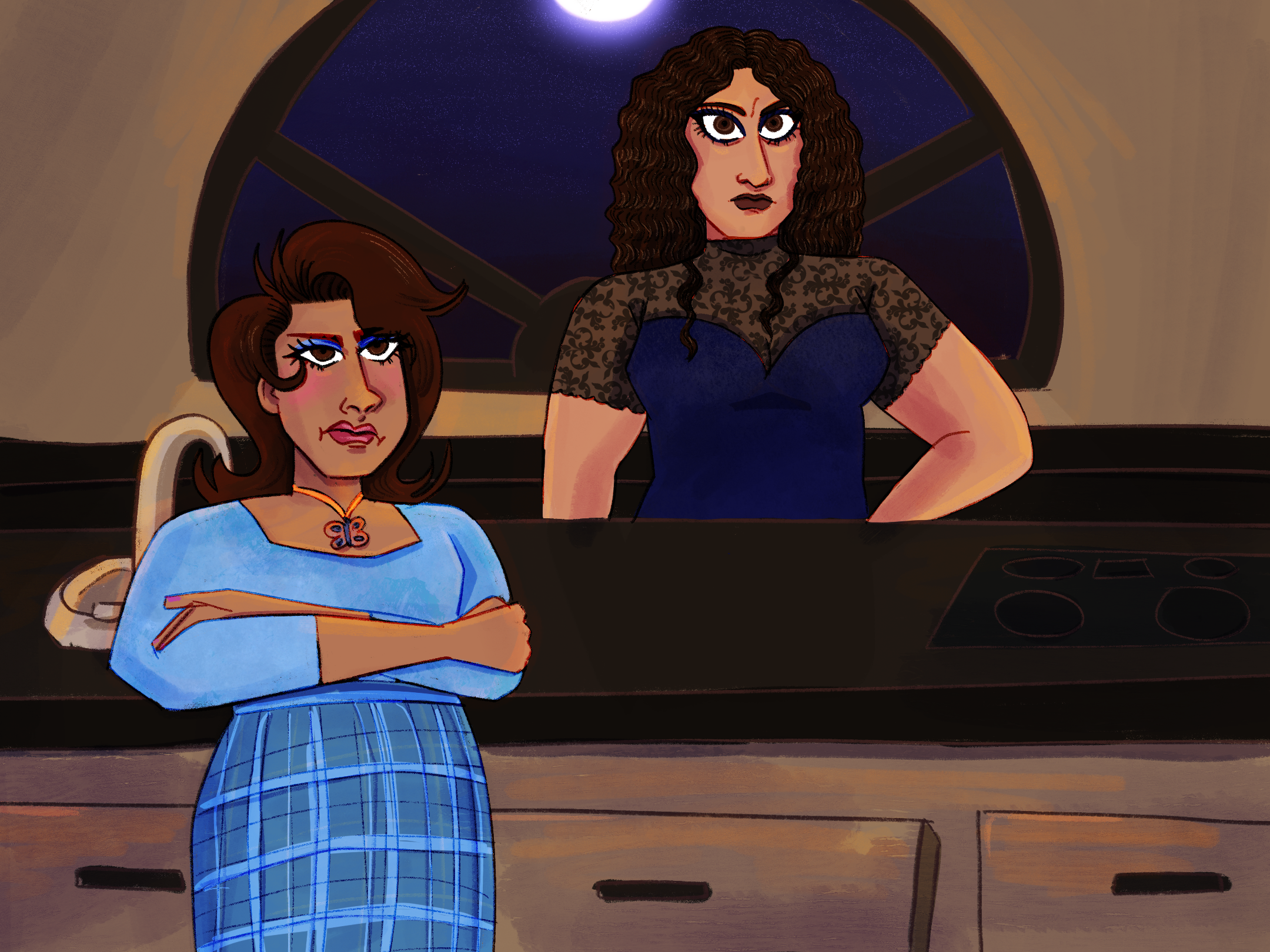 the coolest people in town. catalina desperately wants in. 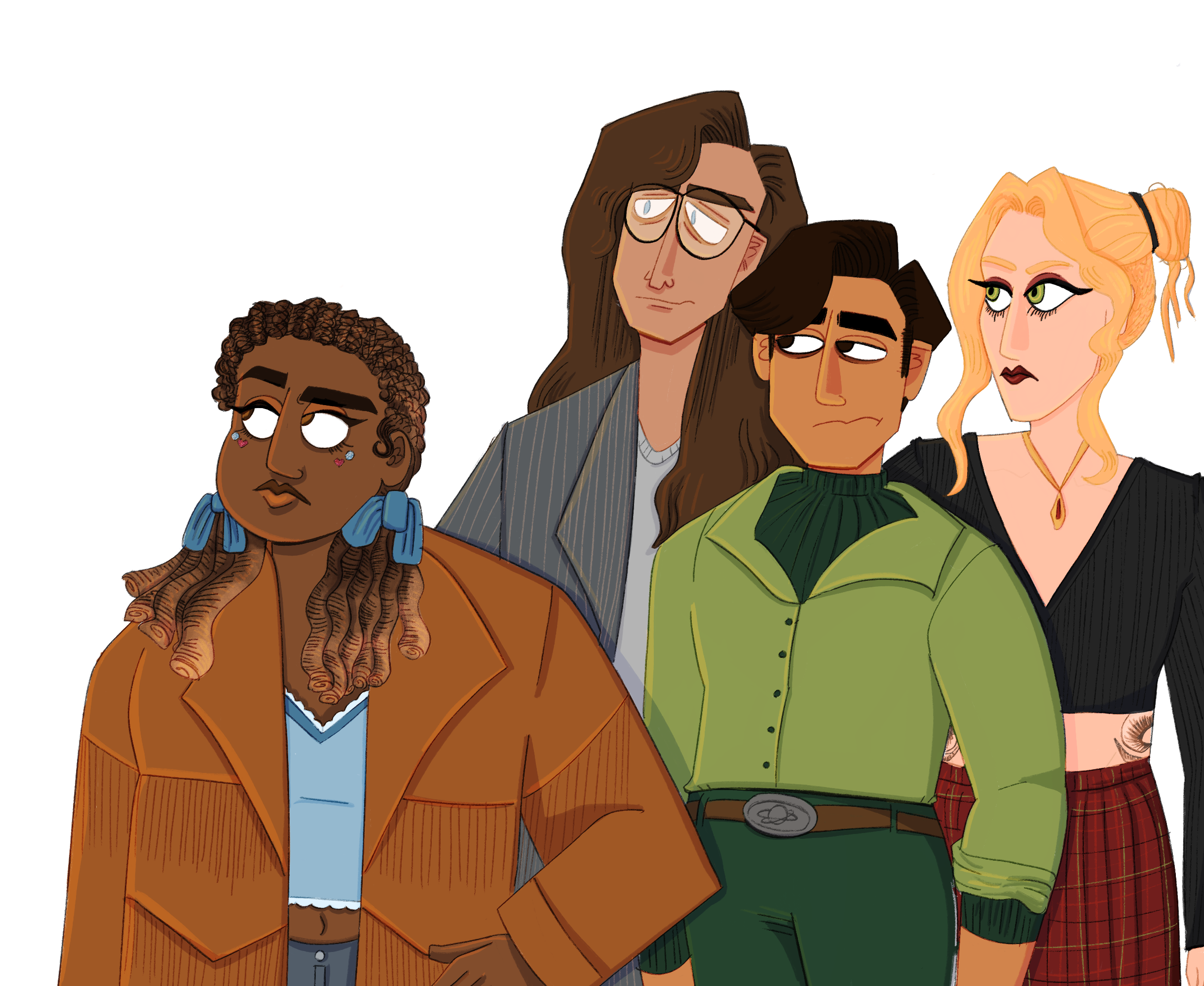 when she's not hunting down retro my little pony figurines on ebay, shes watching buffy the vampire slayer. she thinks she is the leader of the Girls social group, but patty would disagree. she considers patty and chelsea to be her best friends but she also just kind of finds them annoying. there's not enough people in town to be picky, though. she has a boyfriend named Charlie, who lives on the nearby island of Bridgeport.

she thinks she leads the Girls group, but any authority she has is more of a result of her being loud as opposed to her having any good ideas. shes pretty rude to everybody. she thinks richard nixon should have stayed in office for the remainder of his term. she has an alter ego that she uses to run an MLM. if you ask the people of West Port, her name is Reagan Rayleigh and shes a charming blonde from tennessee who is living a boss babe lifestyle.

shes a quiet lesbian with a poor taste in women. shes hopelessly in love with patty. she got the red dragon back tattoo on her back. she got it because she "enjoyed the film". she likes to preform satanic rituals. her parents disowned her, for the satanism thing. she is the member of the group to first befriend jack, and the two are good friends. 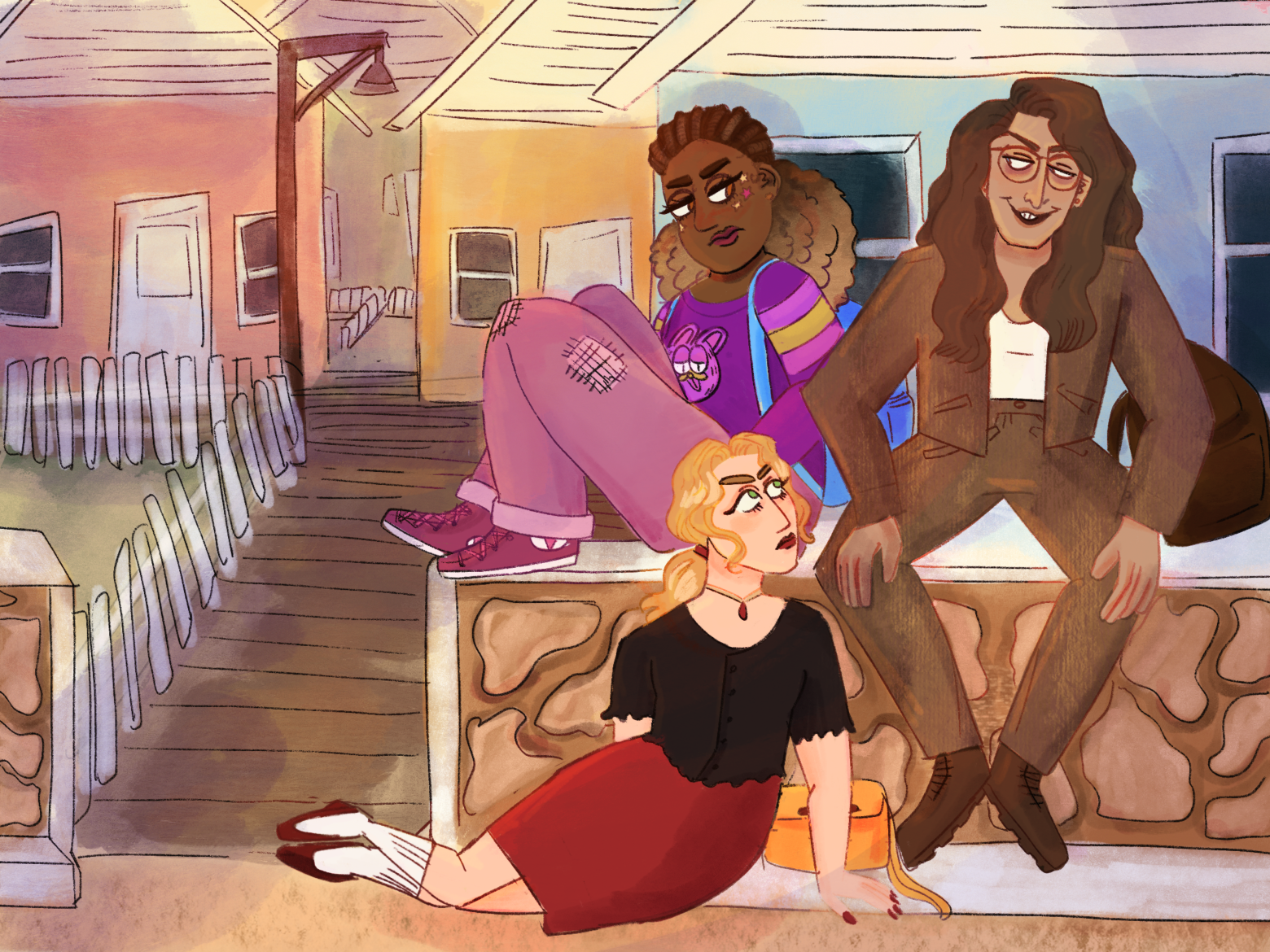 he showed up in town recently with vintage clothes and a handsome face. for a town of young people who have grown up with each other, having someone new in town is very exciting. he has no family and no one really seems to know much about him. he can be a very anxious at time, about germs, physical touch, and is typically wearing several layers of clothing. hes also vegan! he is typically associated with the Girls social group (despite being a fella at the moment), but is also friends with the Chill crew. a lot of weird things happen to him. 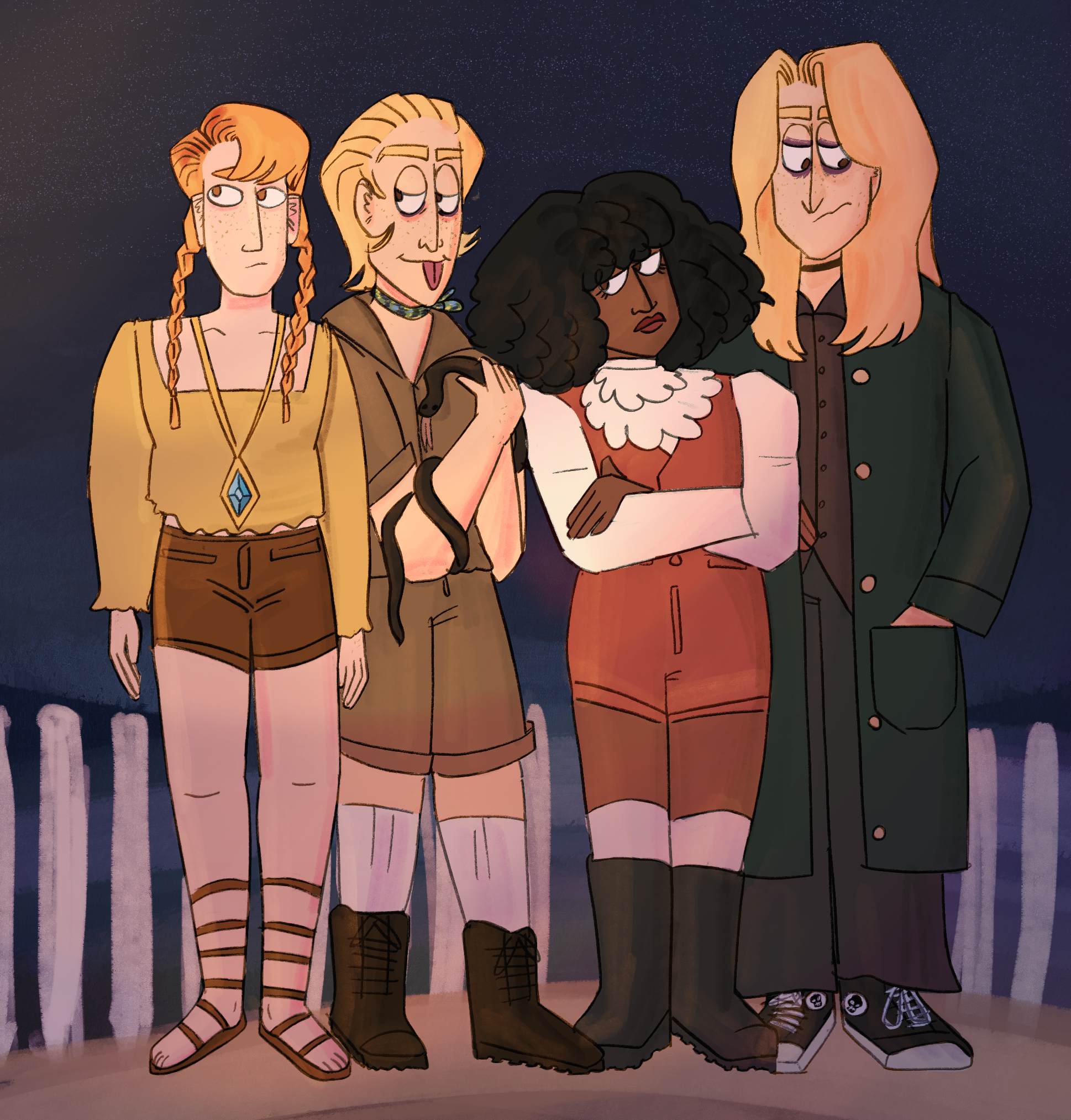 most people don't know her first name, and just call her Devereaux. she moved to the city from canada, but the excitement wore off when the Girls realized she was too normcore to hang out with them. shes also a magical moth girl who can create moon lasers and fly around. she enjoys stargazing and riding around on skates. 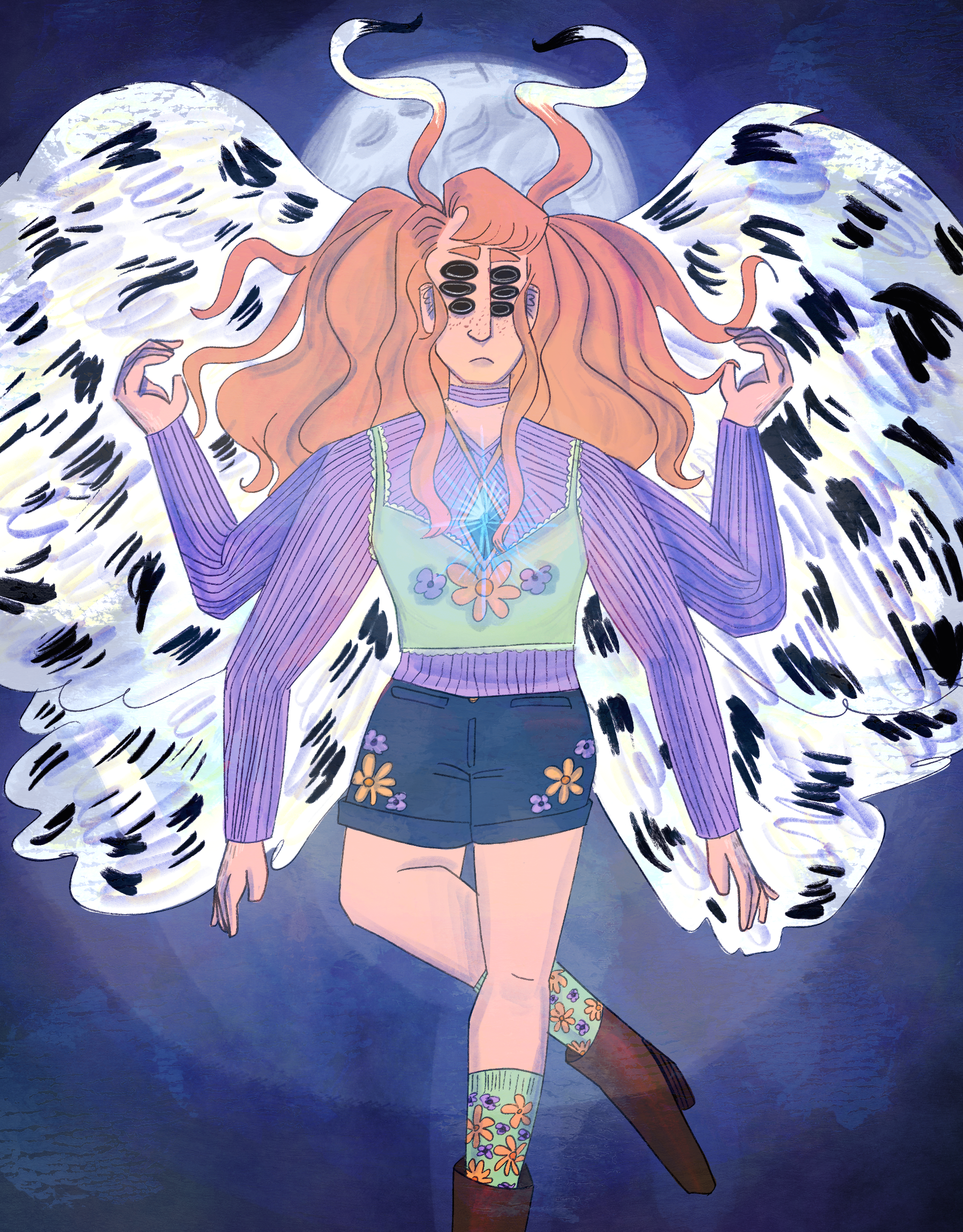 the middle child of the Macnamaras. hes a young man with excellent memory and a passion for the outdoors and working with animals. he is a laid back guy who thinks everyone in town just needs to calm down a little. one time he went to coachella but it was too loud and crowded and he had a bit of a meltdown so he left. he really enjoys the beach boys and usually has his walkman on him.

clearly the coolest person in town. they make weird hyperpop music. they stopped using a last name because they couldn't think of one that sounded good with Ziggy. they also have a passion for theoretical physics and can ramble about it at length. they aspire to move to West Port and make it big. they're currently dating Quentin Macnamara, who makes them cool custom clothes.

The oldest of the Macnamara siblings. hes chronically disabled and spends most of his time in bed. hes kind of a dick. he works from home as a tailor. he once accidentally took some of Ziggy's hrt after mistaking it for his own medication. hes pretty popular on the world wide web, but that might just because he's dating the esteemed hyperpop artist, Ziggy.

after the mysterious disappearance of her father and sudden arrest of her brother, she is in charge of the family business. shes peppy and loves expensive fashions. she once was attacked by a hitman but she solved that problem with the use of a chainsaw. she used to get frustrated when people underestimated her, but now she uses it as an advantage. 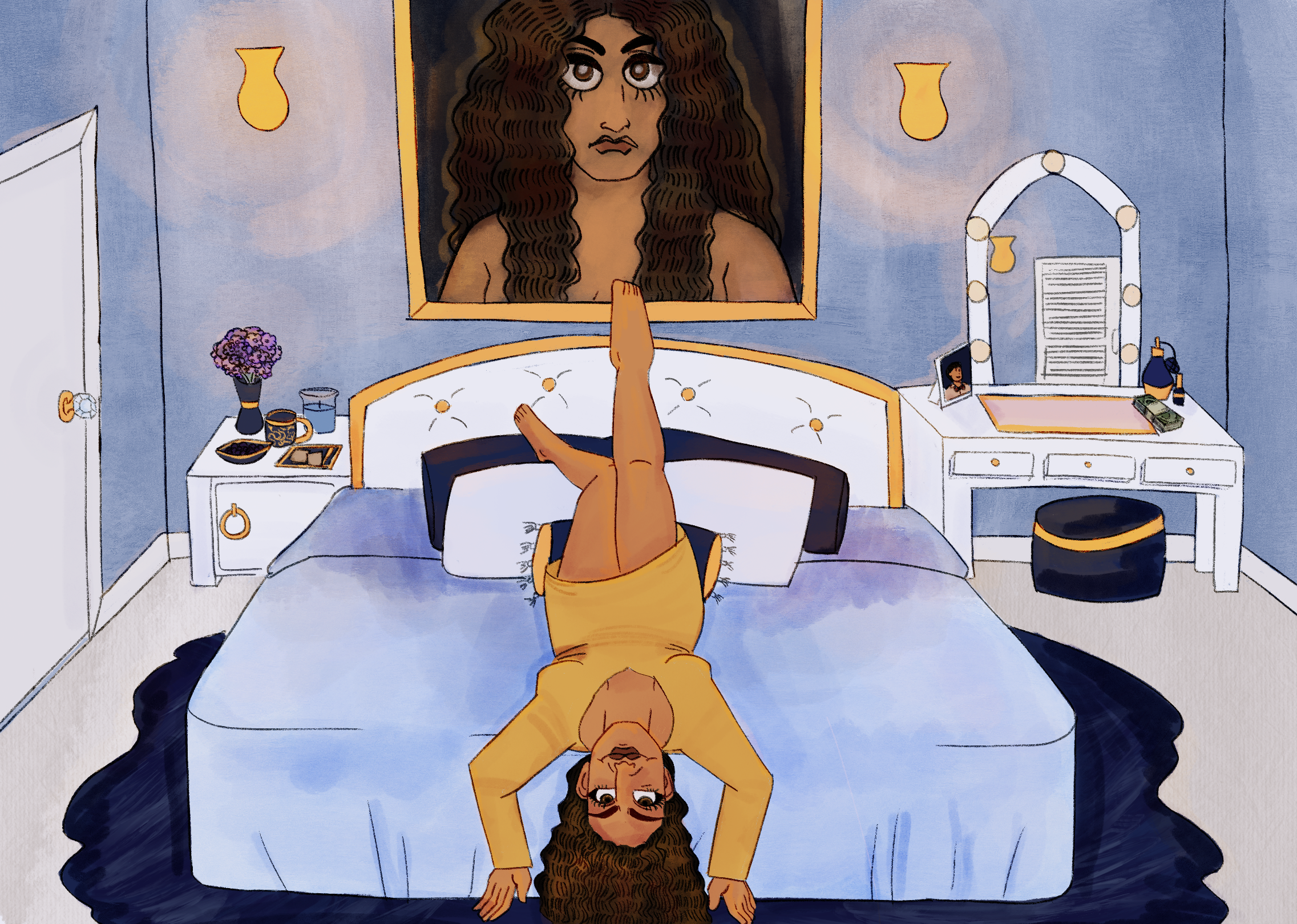 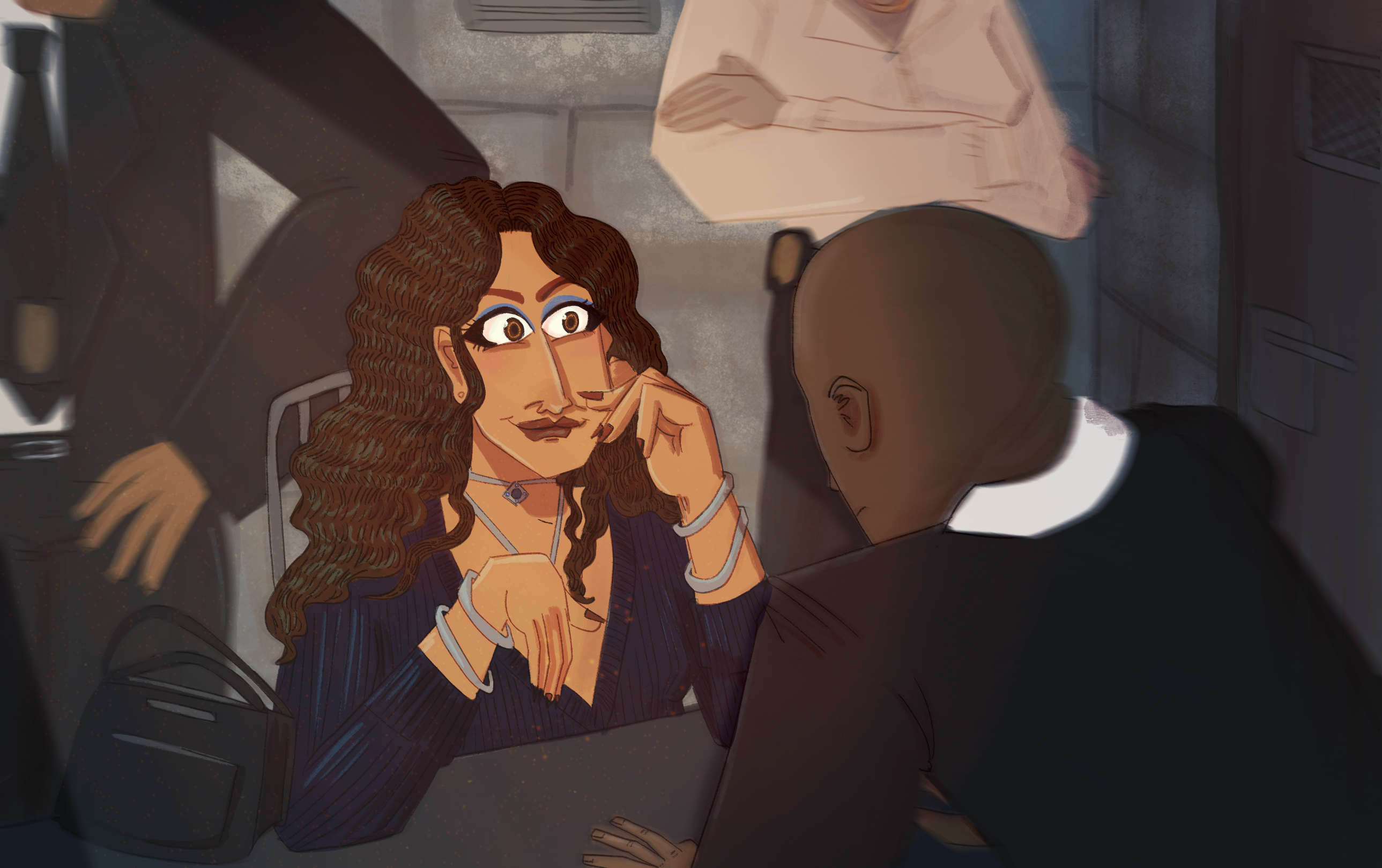 hes in one of crime families, but he's not well regarded in his family. hes got mommy issues. hes got daddy issues. hes just got a lot of issues. hes mortimers cousin but they never acknowlege it. he went to med school for a while. cats seem to follow him around. he decides to team up with Nicoletta to kick his parents out of town. 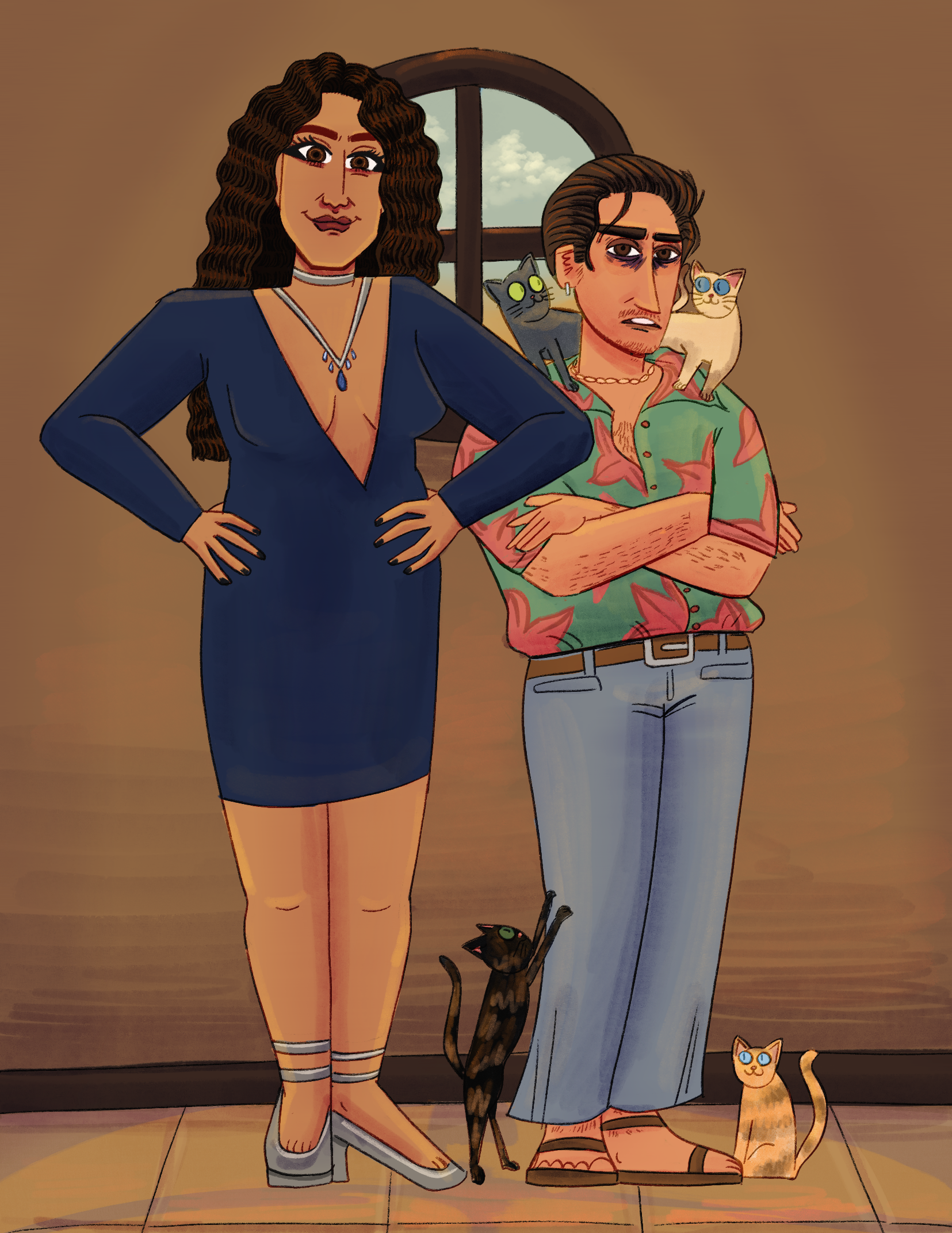 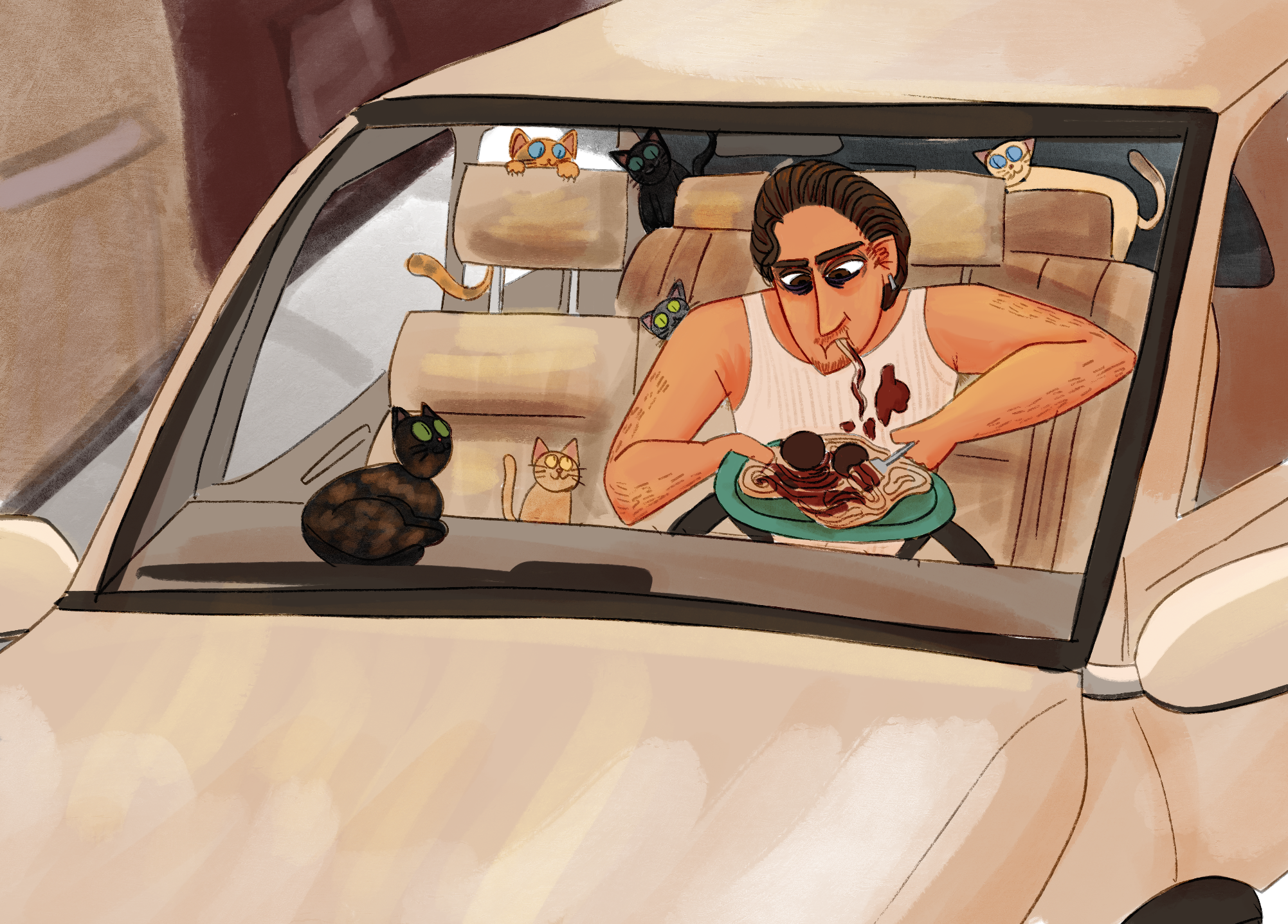 They do not like Danicka's boyfriend Charlie! Coco is the young heir to a newspaper fotune, and after having lost his family in... the accident... he has withdrawn from the social scene, spending most of his time with his boyfriend, a tough but very shy fella interested in the paranormal, Finn.. When Finn's sister went missing, and the last person to see her was Charlie, Coco and Finn decided that they'd dedicate their endless time and Coco's vast fortune to solve this mystery ruin and Charlie's entire life. 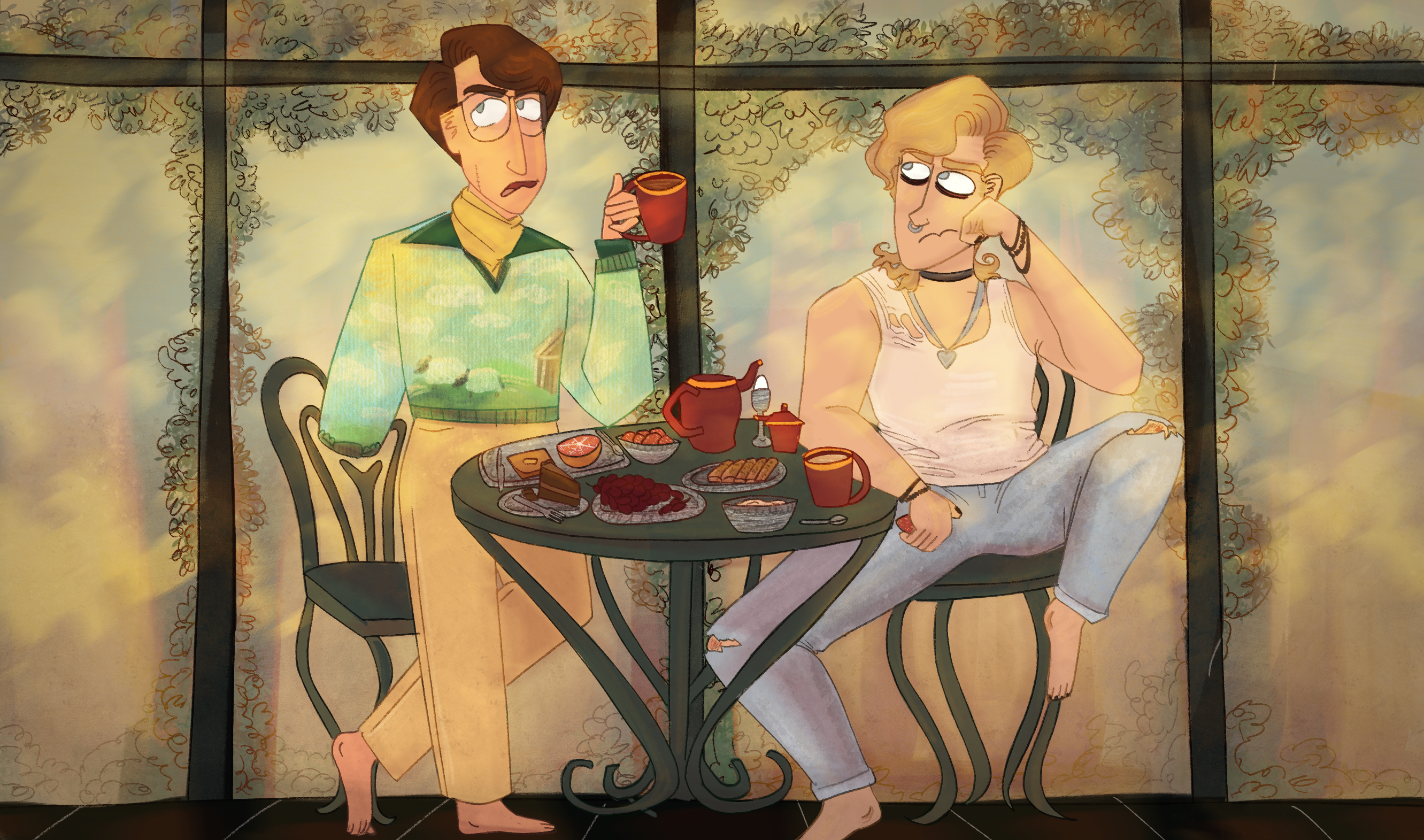 legendary witchhunter. sister of Danicka's boyfriend, Charlie. briefly dated Mortimer, until discovering her had powers and attempting to slay him. he kinda ghosted her after that :-// she was adopted as a baby alognside her brother Charlie by a polycule of 5 lesbians. sometimes they shorten their last names to "Smith". she is deadly with her pair of golden knives. 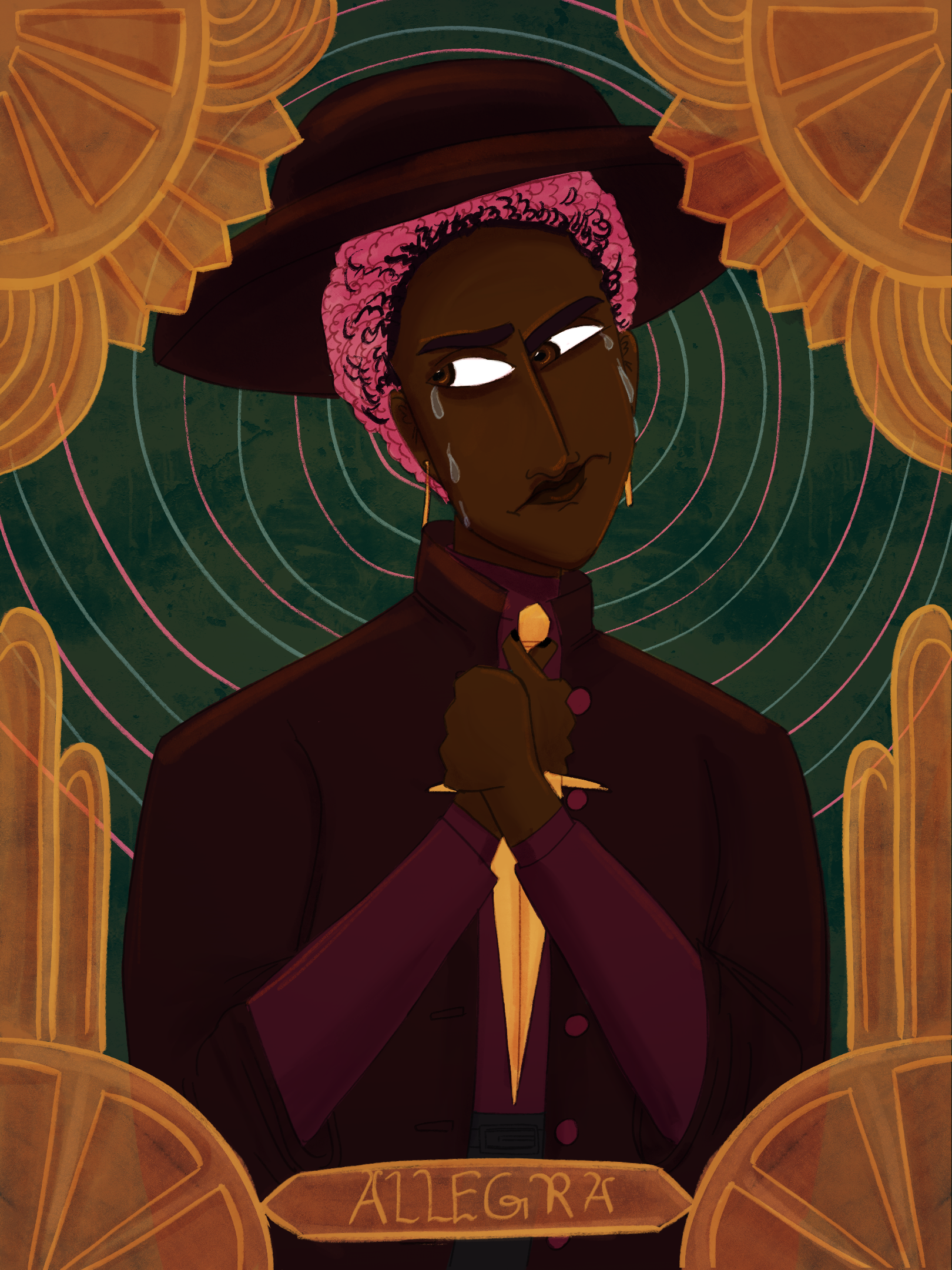 originally from boston. has a boston accent. vietnamese american magic user, specializing in plants. he's also figured out how to teleport via ripping portals in reality. Raoul doesn't like it when he does this. Allegra tried to slay him once but he just portal hopped away. hes a pretty neat fella. 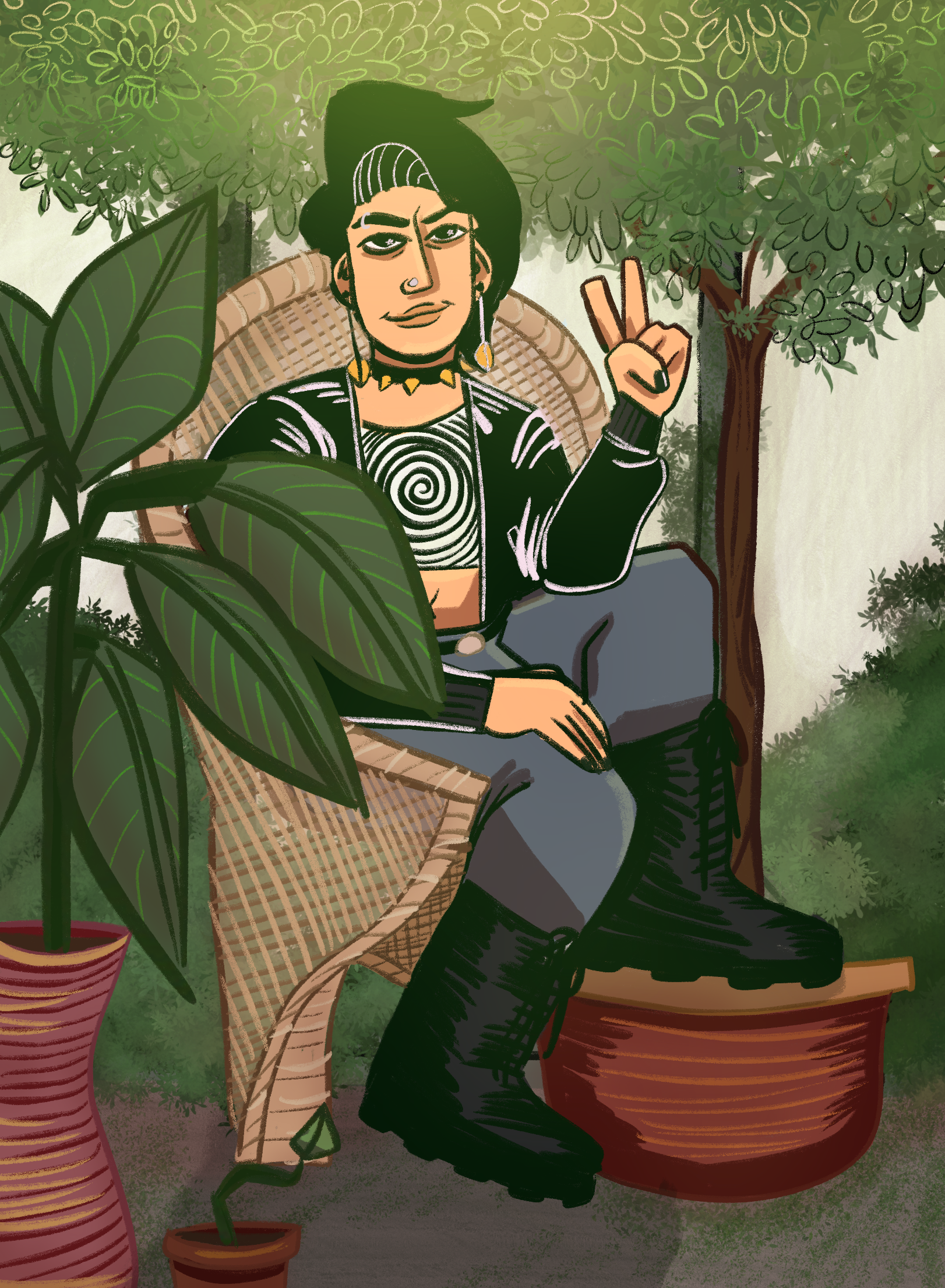 Raoul and The Raven 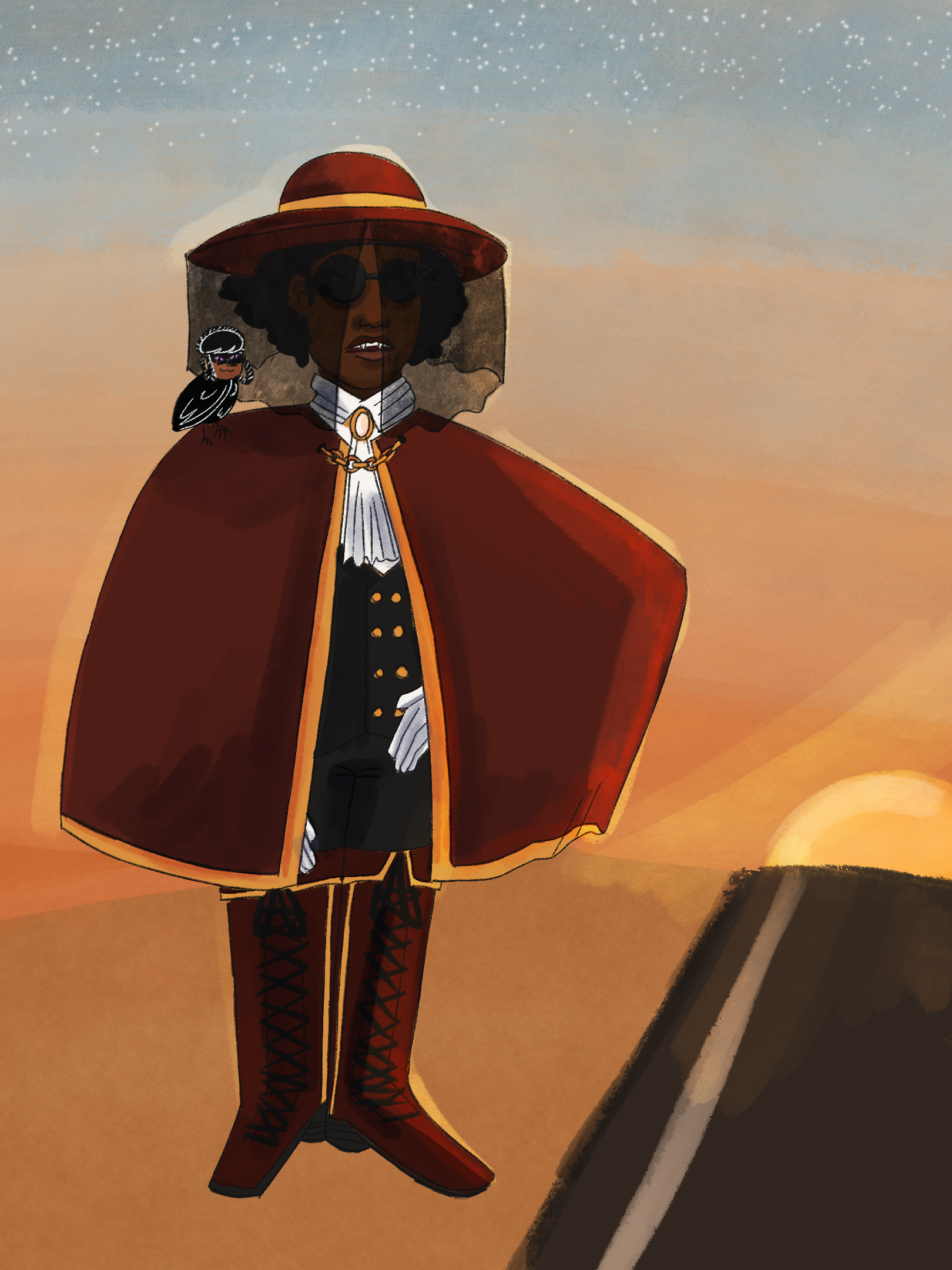 Raoul is the oldest living vampire. he has spent thousands of years using magic in order to maintain the fabric of reality and prevent apocalypses from happened. typically, he's faced up against a big bird who loves chaos, and the only individual whos also been around for thousands of years, The Raven. they love starting trouble, seemingly just to get Raoul to hang out with them. for thousands of years, the two have been in a cycle of fighting each other, with Raoul undoing whatever sinister plan The Raven had cooked up, but now that Raoul has lost his enthusiasm for his role, becoming jaded with humanity, the two of them have started to develop a strange relationship. theyre friends. theyre rivals. theyre lovers. 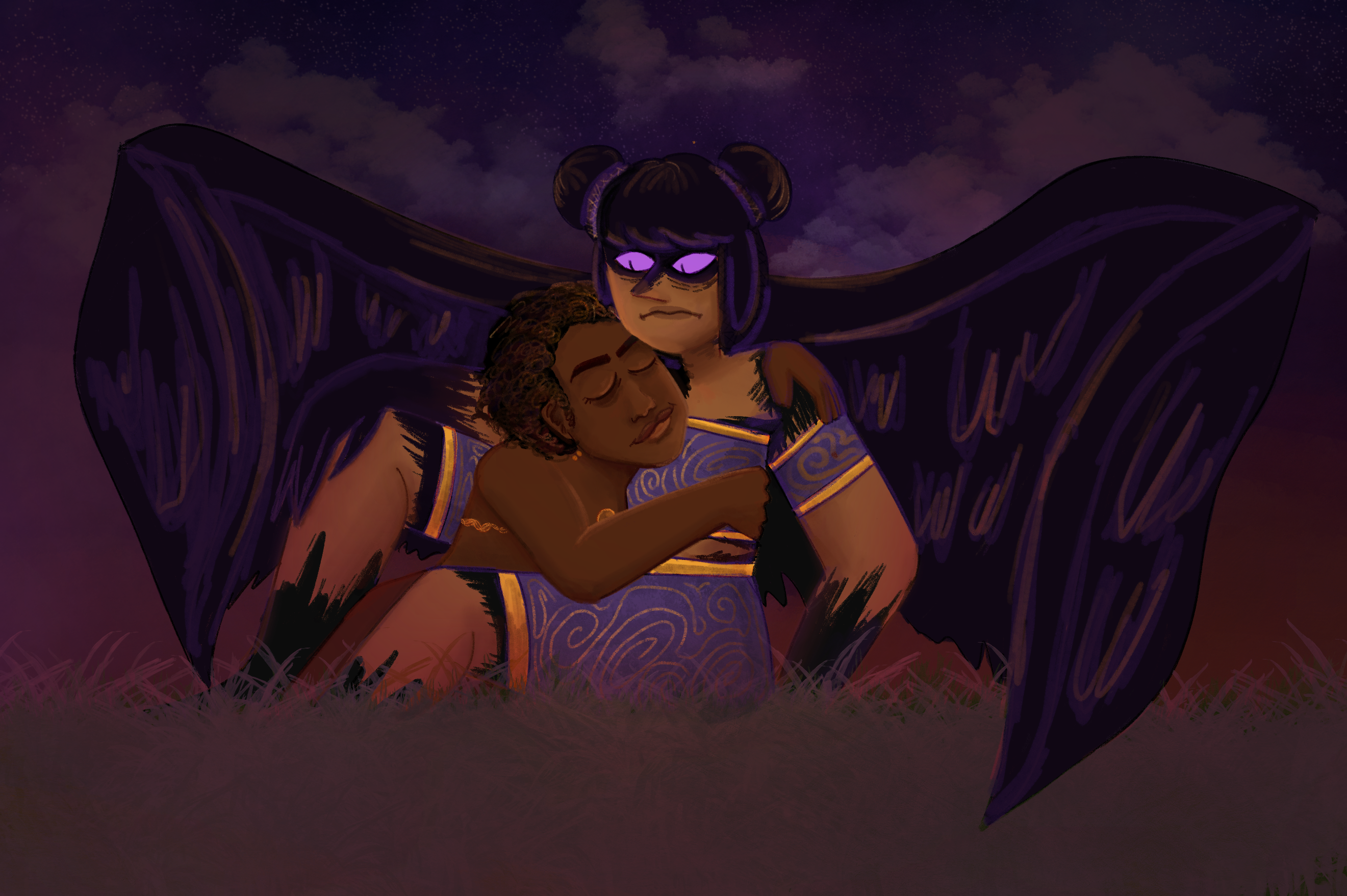